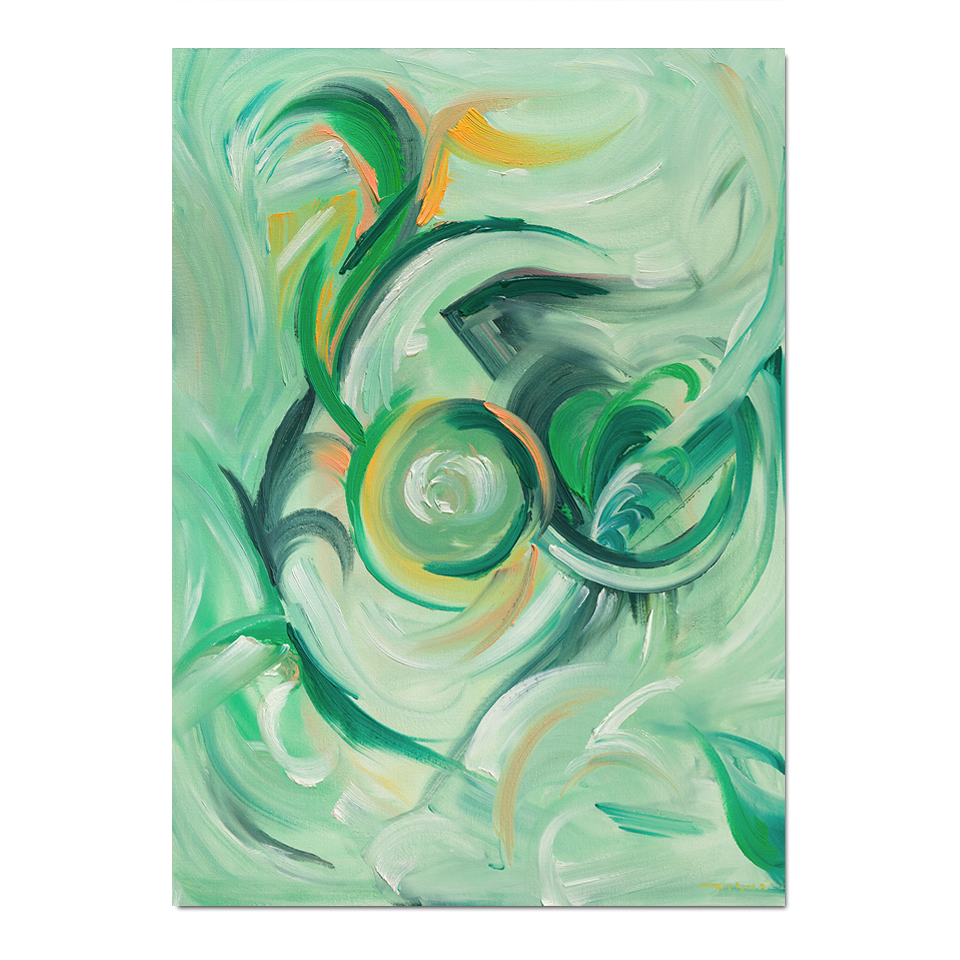 Printed on a matt photopaper HP 270 g/m2 on a high-end Hewlett-Packard 12-ink plotter. Sold without a frame.

Contact the author
You can find the original piece here

The inspiration for this painting came to me on Saturday. It was a day when, despite a long sleep, I could not fully wake up for the first few hours, and I did not have the strength or desire to do anything. I just sat there with brain fog and an uncomfortable feeling in my body. I realized that I should slow down, be calm, and with myself today. I know I’m often too hard on myself and feel pressured, under the weight of everything I think I need to do. Then I can’t do everything I want, and it still bothers me that I’m not good enough to handle it according to my original ideas.

So today I thought I would be calm and kind to myself. I know that I often stress unnecessarily, and the only result I get is that I feel bad. During this day, I received inspiration for this painting. I came up with the name Regenerate or Regeneration. And also the fact that I would like to paint it in a way that I let myself be guided. I wanted to create in such a meditative state as I managed to do a few times in my past. It also occurred to me that it should be green, which in this case is a symbol of healing for me. Also, during the day, I remembered the song Re-generace by Paulie Garand, and it occurred to me that, I don’t know why, but it should be orange as well.

I didn’t get to paint during that day, it wasn’t the right time. The right moment came when I really didn’t expect it. At 1:30 in the morning, just when I wanted to go to bed. And I thought, “Really? Right now?”

So I set to work. Before I started painting, I had the intention that I wanted the work to regenerate me during its creation, and to regenerate others and its future owner for upcoming decades to come after its completion. To heal their physical and emotional wounds. I then painted in a state of meditation, one stroke after another, and I didn’t pay attention to whether I liked it that way or not. I did exactly what came to me at the moment.

When creating in this style, I’m often a little scared because I never know what will come out of it. But despite that fear, I still believed and let myself be led.

It’s a very interesting painting that I would never paint with my mind. I don’t know what to think of it. But this painting did not come from my ego, and therefore, I have no right to judge it. The more I look at it, the more it grows on me, and I still find something new in it. It is exactly as it should be, and I believe it will achieve its purpose. Its creation filled me with energy, and I didn’t even want to sleep afterwards. It will heal you too.

And by the way, by being calm all day and doing everything with ease, the unpleasant morning became a very pleasant day.